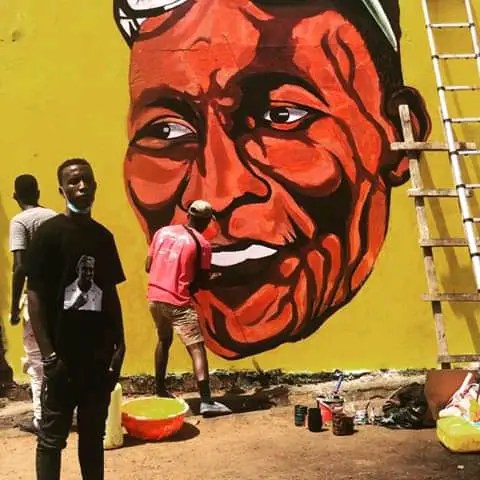 The Boxers were led by Isaac Ssenyange Junior, a son to the late decided to show their gratitude to their master by making an art piece at Zebra Boxing club Gym located in the Bwaise.

Ssenyange was brutally murdered by security personnel in the wee hours of Wednesday 30th December, 2020 just 40 metres from his home in Bwaise.
He was buried at his ancestral home in Musuulita.

Ssenyange began his Boxing career at Dynamic SS, he had a stint in the United Kingdom in the early 2000s where he was detained on rape cases. He was also a former Bombers captain.

In 2012, he made his professional debut against Kenya’s Patrick Amote and according to the Boxrec, his last fight was a technical knockout win over Abbey Kebedi on April 18th, 2019. He had 12 fights, 10 wins and two draws.

He trained hundreds of ghetto youths in Boxing through Zebra Boxing club and Lukanga Boxing Club.

At the time of demise, Ssenyange was the manager in charge of general duties at the Uganda Boxing Federation and the Boxer’s representative on the Uganda Professional Boxing Commission.