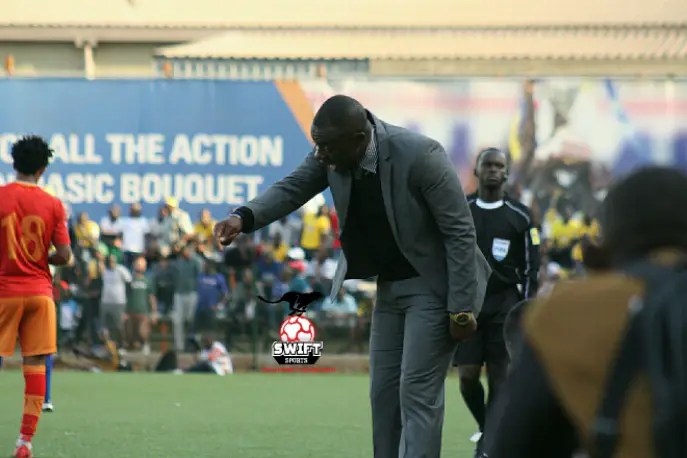 Mutebi shouts instructions to his team against St George

“Our qualification to the group stages of the Champions league is good not only to us but to Ugandan football at large”. Said Mutebi at the post match conference after eliminating Ethiopian giants St George FC at Lugogo.

A modicum of excellence and the decision to hire services of the eccentric Mike Hillary Mutebi was an inspired one.

Because he does things differently, Mutebi was at first branded as arrogant and egoistic but he has worked around the clock to disprove his doubters.

When KCCA FC was bundled out of the champions league to find it’s way into the lesser competitive race last season, many attacked him forgetting that he was the reason why the club was daring to dream, he ignored all the negative talk and concentrated on taking the club to the group stages of the confederations cup in which he made the Star Times stadium a fortress playing a traditional exciting brand of football (kawowo) that KCCA FC is for long identified with.

Mutebi has blended the experience of seasoned stalwarts like Kavuma with the young and fresh likes of Kizza, Okello and Poloto

He went on to retain the League and achieved a feat that no coach had ever attained at lugogo winning a double for that matter.

Enter the new season season, following a player exodus which saw some of the fans’ favourites exit, he was branded clueless.

Despite all that, he emphatically stated that his current team was better than the previous one, many thought he was using reverse psychology to motivate his players but it appears results are vindicating him.

Last season’s team hard some extremely talented individuals like the goal scoring king in Geoffrey Sserunkuma but there is no better collective unit than this squad.

Mutebi has varied his tactics to create a system that is hard to break down and playing a high tempo pressing game.

Charles Lukwago is being the revelation of the season, keeping a clean sheet after another as he makes superb saves that can make anyone at Lugogo forget Ochan’s heroics.

Mustafa Kizza, Allan Okello and Julius Poloto continue to show case their talent and abilities in the game.

At his age, Habib Kavuma is having an Indian summer while Timothy Awany continues to prove right those that had likened him to the great John Ross Latigo.

The bottom line therefore is, as long as Mutebi continues to be the man at the helm of the Lugogo based side with the kind of principle that emphasises discipline and hard work, KCCA FC is destined for more. My only prayer is that other Ugandan clubs and coaches pick a leaf off his mark for the good of the game.

Four Ugandans on the score sheet as Sofapaka edge Tusker in a 9 goal thriller
CAF CHAMPIONS LEAGUE: All you need to know about the draws to be held on 21st March 2018