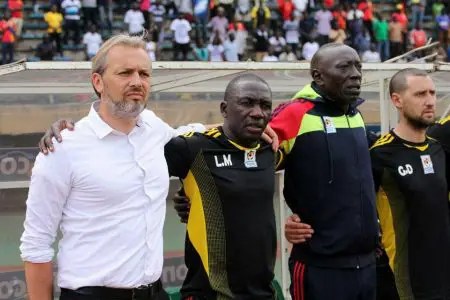 Following a barren stalemate with Malawi in the international friendly at Mandela National Stadium, Namboole. Uganda Cranes head coach Sebastien Desabre confirms that his side needs a technical player in midfield to boost his side’s attack but was happy with the players commitment.
He says,

“We lack a technical player in midfield who can drive the team forward as well as linking up play between the defence line and attackers. I am however happy with the commitment of the players.”

He also highlighted on the major targets they had ahead of the two friendlies.

“We had two targets ahead of the friendlies and one was to win both games because it brings confidence but we only managed to win one drawing the other and with a clean sheet.”

The other target was to assess some players and associations like today I chose to try and see the cooperation between Emma Okwi and Yunus Ssentamu. We also opted to use a 4-4-2 system and later turned to a 4-4-1-1 system.”

On how the friendlies have helped him understand more about players that he had not yet seen and those he thinks will work with him in future.

“I now know many players who play abroad before I only knew players who were in the CHAN tournament like Isaac Muleme. I will call some new players during the next international engagements in May plus those of Farouk Miya, Moses Oloya and Khalid Aucho.”

The French tactician will now turn his focus to the 2019 AFCON Qualifiers against neighbours Tanzania and Lesotho slated for mid way this year.