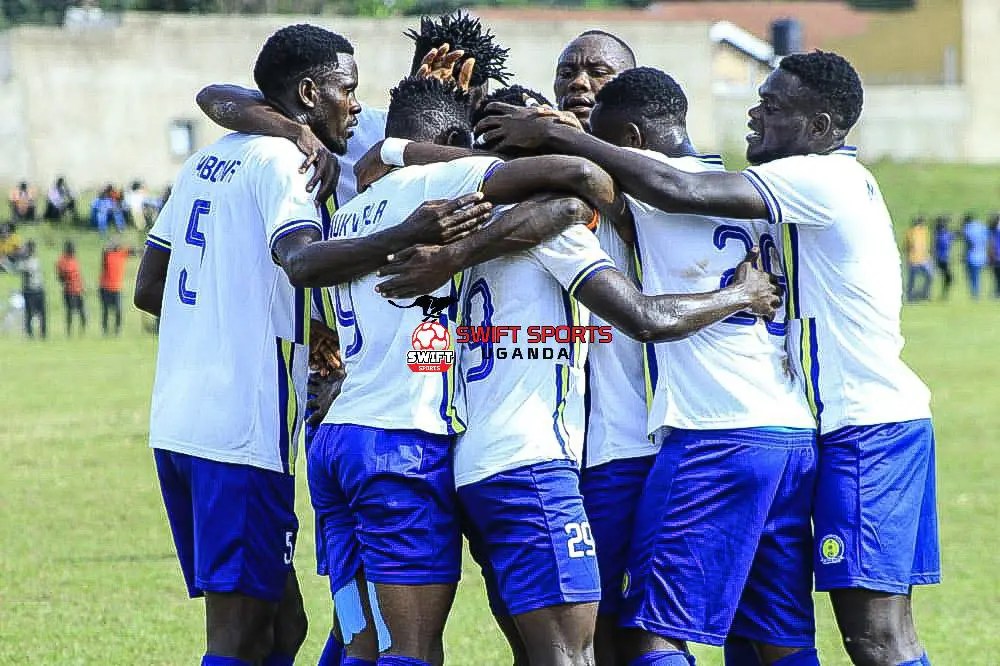 URA players celebrate one of the goals against MYDA

URA Football Club will face off with Wakiso Giants in a Uganda Premier League contest at Arena of Vision Ndejje.

The tax collectors come into this game after a 3-2 win over MYDA at King George IV in Tooro while Wakiso Giants played out to a 2-2 stalemate with SC Villa in their previous game.

This is the second time the two sides are facing off in the Uganda Premier League. Wakiso Giants won the first meeting 3-1 at Kabaka Kyabaggu Stadium last season.

The tax collectors however, suffered a 1-0 defeat to Express FC in the last game they hosted at Visions of Arena Stadium.

The Purple Sharks have only registered one win in the opening seven games with the other six ending in stalemates.

“We are confidently very ready, we are trying to improve and developing as a team. Their are some elements of maturity but not consistent enough and we are looking for more improvement in the next game.”

The hosts will be without midfielder Ivan Sserubiri so as long-term absentees Jackson Nunda and Michael Birungi.
Winger Joachim Ojera is also a major doubt having sustained an injury in the victory at MYDA.

The visitors are expected to welcome back defender Edward Satulo after missing the draw with Villa due to a compassionate leave. George Kaddu will again miss the game due to licence issues.

URA FC will look up Cromwel Rwothomio who netted a hat trick at MYDA and skipper Shafik Kagimu for inspiration.

On form Kipson Atuheire who has netted in two consecutive games alongside Ibrahim Kasule are expected to lift the visitors.

URA FC are currently in 4th place with 14 points while Wakiso Giants are 11th with nine points.