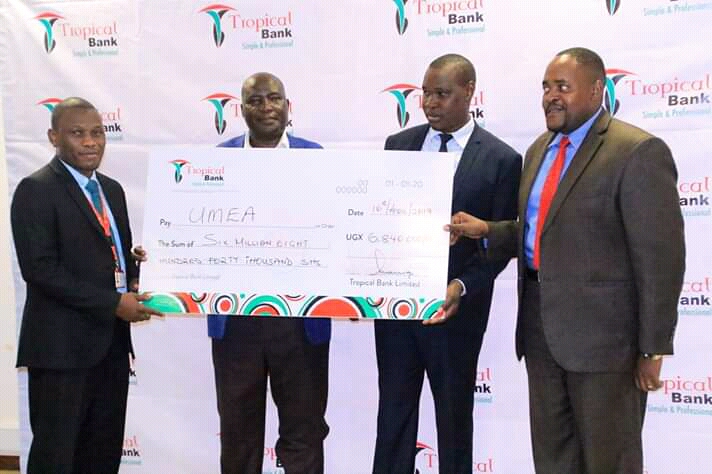 With just days to the 2019 UMEA Muslim Solidarity games, Tropical Bank has boosted the competition with a financial support of UGX6.8 Million ( Six million Eight hundred and forty thousand shillings.

At a function held at Tropical Bank head offices in Lugogo, Dr. Sulaiman Lujja the manager Islamic banking commended the organisers for the improvements in the games. He also assured them of an improved sponsorship

“I thank the organising committee of the UMEA Solidarity for the improvements exhibited in the competition.

Tropical Bank will be focusing on making an improved sponsorship and we urge our customers to continue supporting us as we promote the flagship campaign of Tropi-Hijja. Lujja stated

“I thank Tropical Bank for the financial support rendered to us, this is now the third time that they are giving us a hand. I believe this will help us in hosting a successful competition.”

The competition is slated to kick off on Friday April 19th -22nd Easter Monday and will be hosted by Kasawo Islamic SS in Mukono District. Schools are expected to start reporting tomorrow Thursday April 18th.

Last year, the event was successfully hosted by Nkoma S.S in Mbale with Kibuli S.S as the overall winners.