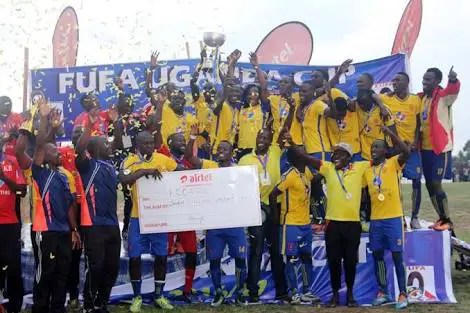 KCCA FC and Vipers SC are meeting up in the highly anticipated final of the Stanbic Uganda Cup to be hosted apt the Emokori grounds in Bukedea district on Saturday 9th June 2018. Kickoff time is 3:00pm.

Below are some of the facts about the Uganda Cup and these are profiled in numbers
The 44th edition of Uganda Cup brings 9 time holders KCCA FC and Uganda Premier League champions Vipers together.

Coffee United SC were the first ever winners of the Uganda in 1971 while KCCA FC are the defending champions after besting Paidha Black Angels 2-0 last year in Arua.

10 – Express FC has won the Uganda Cup the most number times (10) with the tenth title coming in 2007. Only rivals Villa and KCCA come close with 9 each. URA FC follows with 3 triumphs.

17 – KCCA has the most number of the appearances in the Uganda Cup final (17 times) with 2018 duel with Vipers SC inclusive. Express FC has 14 while Villa comes 3rd with 12.

4 – Vipers are making their fourth appearance in the Uganda Cup finals. They have lost twice and won against Onduparaka at Nakivubo stadium in 2016.

0 – No non top flight team has ever won the Uganda Cup since its inception.

9 – Nine of the previous 43 finals have been decided in spot kicks, with Express vs KCCA fixture dominating with 3 shoot outs of the 9. 1976 was the first final to be decided on penalties, Gangama United winning it while 2014 is the recent, URA edging KCCA 4-2 after 2-2 full time draw in Mbale.

4 – The most appearing fixtures in the Uganda Cup final. KCCA vs Express, Express vs Villa and KCCA vs Villa have appeared most, all coming on 4 occasions.

3 – Only 3 teams have won the Uganda Cup back to back, that’s is KCC, Express and Villa. Express has accomplished the feat on 2 occasions unlike KCC and Villa.
Express is also the last team to do so winning the the Cup in 2006 and 2007 against Maji and KCC respectively.

Sportspesa Super Cup : Gor Mahia defeats Batambuze’s Singida to book a place in the final
Vipers seek to join the double champions class as they take on KCCA FC