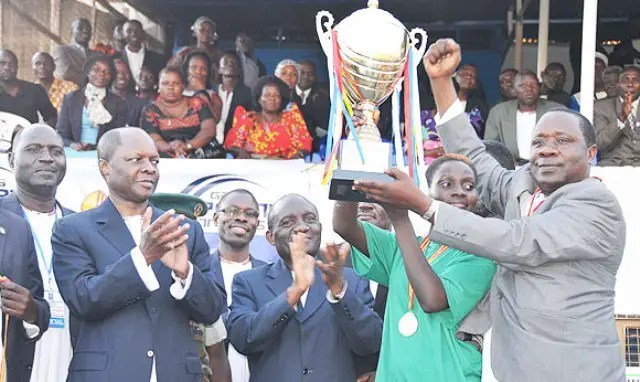 Ssingo were the winners of the 2015 edition of the Masaza cup.

The 2017 Masaza cup could not get a more befitting final than the perennial nemesis Gomba and Ssingo. They will be facing off for the 3rd time in this year alone after having been pitted together in the same group.

Ssingo’s Shafiq Bisaso stands as the most decorated coach of the tournament after winning it twice with Gomba and once with Ssingo in 2015, Bisaso has never lost in any of the times he has reached the Masaza finals. He insists he is not satisfied with victory and he is yearning for more. He says,

“We have prepared very well for the finals and we have no major injuries though Mukwala Steven has a minor injury, but he is likely to be fit for tomorrow.”

“I won two trophies with Gomba in 2009 and 2014 so I have a lot of respect for them, but this is an other chapter in my life and I need to add on my success in the tournament. “

Ssingo fans are among the most ecstatic fans of the tournament and Bisaso calls them up to rally between the team to achieve the desired victory. He adds,

” Our fans have always been supportive be it home games or away games, i strongly believe they will do the same thing tomorrow. We gave them happiness in 2015 at Namboole and i believe we shall do the same for them this time with the help of the mighty Allah.”

His opposite number Simon Ddungu has reached his first ever final, his only time in the finals came in 2013 when he was Edward Golola’s assistant for Mawokota. A confident Ddungu says,

“We have trained well and nothing can deny us a win tomorrow and the good thing is we have no injuries coming into this game. Last year we lost on the final stage to Buddu this time around we are ready to be crowned champions,” he concluded.

There will be also a battle for the golden boot with top scorers Joseph Jjanjaali of Gomba and Mukwala Steven of Ssingo still tied on 8 goals.

Gomba Lions have been the most consistent performers of this year’s edition,  they will look to cap it with a championship

Joseph Jjanjaali who was among the victorious Buddy team of 2006 believes that Gomba has a massive chance to win the Cup, he asserts,

“Last year i missed the finals with Buddu through illness but this time am fit, ready and confident we shall win.”

Ssingo’s hope will also be vested in the newly signed Vipers’ striker Steven Mukwala whose other target will be clinching the golden boot. He hopes to end his goalless streak in tomorrow’s final,

“I am more than confident that we are going to win the trophy tomorrow, I have gone some games without scoring but tomorrow, I see my self on the score sheet,” said Mukwala.

Ssingo and Gomba were both in Group C this year and their encounter at Kabulasoke game ended 1-1 with Mukwala Steven scoring for Ssingo and Satro Edward was scorer for Gomba. At, Mityana Ssaza grounds Joseph Jjanjaali’s goal sealed the visitors Gomba a win.

This is the 8th final that Gomba will be playing in history while Ssingo will appear in their fourth final, Ssingo are the only team in Masaza cup history to score five goals in a final, this was during the 2015 humiliation of Buddu at Namboole. At the end of the 90 who will be crowned by the Kabaka Ronald Muwenda as the Airtel Masaza cup champions of 2017, Namboole awaits

Last year’s winners Buddu will settle for a third place play off with Busiro after a disappointing result against Gomba at home in the semifinals.

“Uganda a difficult opponent with Basena and Kajoba in charge “. Egypt coach Hector Cuper.
OFFICIAL : Number of teams in the Tanzania super league to increase 20 from 16.