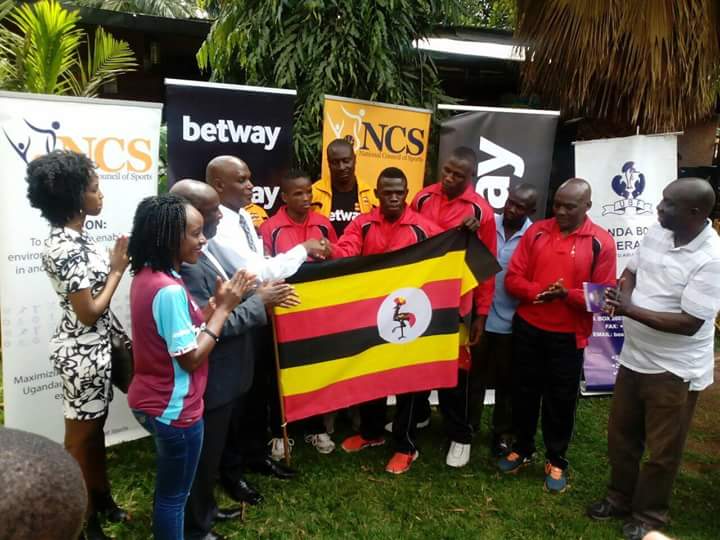 Three bombers have been flagged off to represent Uganda in the AIBA World Boxing Championships in Hamburg Germany. The team will be led by team captain Kakande Muzamir aka King Kong alongside Ayiti David and Kakeeto Godfrey.

The team will be leaving on Monday and will be camping at Hypevision Hotel in Germany all catered for by the National council of sports. Uganda seems to be improving being third on the African continent.

The Bombers are blessed to have got sponsorship from Betway which has provided the airticket for the Doctor Ssekabira Tonny together With 1100 dollars and each boxer 100 dollars for upkeep. The National council for sports has paid off the ticket for the coach and providing space for training the team for the 5 days spent in camp.

Kagera mining company has also provided a ticket and Nyakana has always been providing the necessary help.

” I am completing in this competition for the first time but also in Congo it was my first time to participate in Africa but I did well, i only hope to even do better. Uganda has great boxers and its a shame we haven’t won a medal for all that long but we hope to break that jinx as well”

” I am very improved, I learnt a lot in Congo, me and my colleagues are motivated we are very optimistic ,we shall be looking for knock outs to avoid any chance of coming against Judges ” added the gold medalist.

When asked about any worries for the Bombers, Kakande said,

” My only worry is about boxers that come from a poor background like us, they are very determined, but we are very positive for medals”.

Coach Patrick Ruhinda too in his own words promised nothing but medals,

“This is the 5th week training, the boys are in shape, we have improved alot since Congo, they are faster and we have improved on foot work and movements.We know there are tough nations like Cuba but we shall bring medals home” Said the Bombers’ Coach.