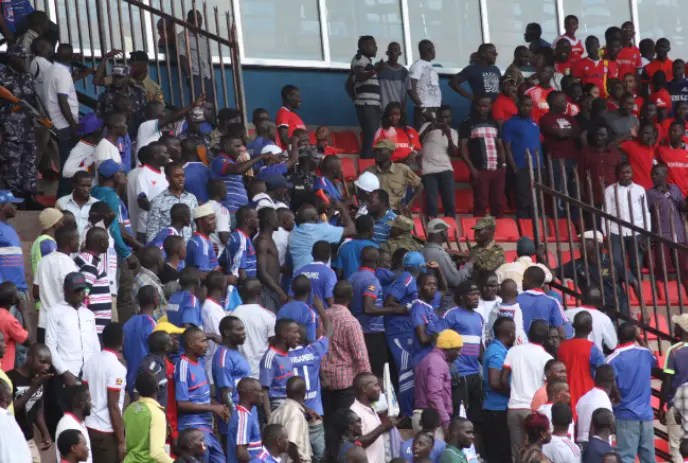 SC Villa have come out to condemn and distance themselves from the acts done by their fans at St Mary’s Stadium in Kitende which included throwing of water bottles on fellow fans and onto the pitch.

They also broke a fence that separates the visiting fans from the VIP section in protest of the referee’s failure to award their team a penalty in a game they lost 1-0 at the hands of Vipers SC on Saturday the 22nd of September.

In a letter dated 24th, September, signed by CEO Valley Mugwanya, Villa have condemned the act of hooliganism or violence in the match against Vipers Sc. The letter states,

“Sc Villa Jogoo wish to condemn the act of hooliganism at the concluded game against Vipers on Saturday 23rd September at St.Mary’s, we wish to express our concerns at people masquerading as club supporters to dent Sc Villa lmage.

The club strongly condemn any form of violence though wish to blame the Police for having failed to manage the few people who were ring leaders in the act of violence and also throwing water bottles onto the pitch and VIP section, which Police failed to arrest the culprits.

Sc Villa as a club we follow the football statutes and laws as by FUFA and world football governing body FIFA and so we discourage any form of violence in all Stadiums.”

The club however, in the letter also says that it’s un fair for everyone to start blaming Sc Villa supporters for what happened on Saturday but not blaming the police who failed to control incidences.

“We wish to take this opportunity to appeal to our supporters those that love football and those that are bent on spoiling our name as Sc Villa to desist from acts of hooliganism.”

The club has also offered to render a hand in fishing out the perpetrators of the acts and they will hand them over to the authorities.

AUPL: UPDF stretches Express FC’s poor run
AUPL team of round 3: The players who impressed most for their teams?