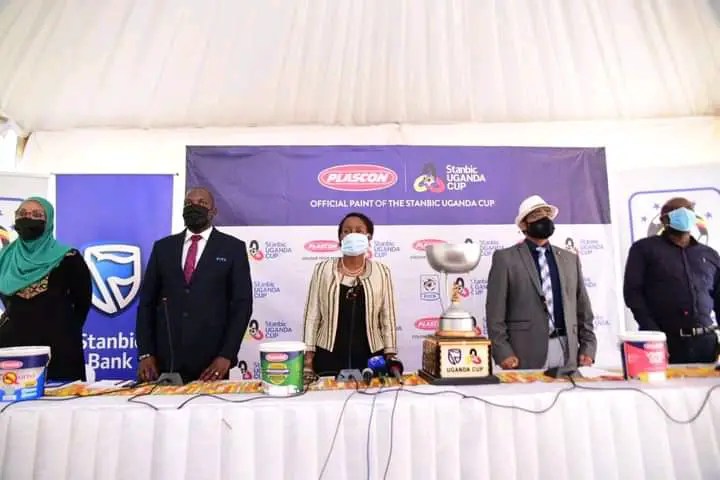 Officials at the press briefing (Photo by Plascon Media)

The deal was announced on Friday at a Press briefing held at the company’s offices at 2nd street in Kampala.

Plascon Managing Director, Gumte expressed his delight upon the partnership

“I am very honored to announce the sponsorship for the Stanbic Uganda Cup. We have always wanted to associate ourselves with the Uganda Cup because of the fact that it accommodates all five divisions of Football.”

On behalf of FUFA, Nakiwala revealed that the sponsorship deal will increase the prize money of the tournament

“We are very pleased to see the development of the Uganda Cup, this is great news to the game. “This deal will help increase the Uganda Cup tournament prize money.”

Officials with the dummy Cheque (Photo by Plascon Media)

The competition was halted last year by the outbreak of the deadly Covid-19 pandemic and this year it will begin on the round of 32 with only the Uganda Premier League and FUFA Big League clubs taking part.

The tournament is scheduled to kickoff on Monday, 5th April with the final slated for July 24th at the venue yet to be communicated.

Proline are the reigning champions following their penalty shootout win over Bright Stars at the 2018/19 in Masaka.

Express FC and KCCA FC are the joint record tournament winners with 10 titles.