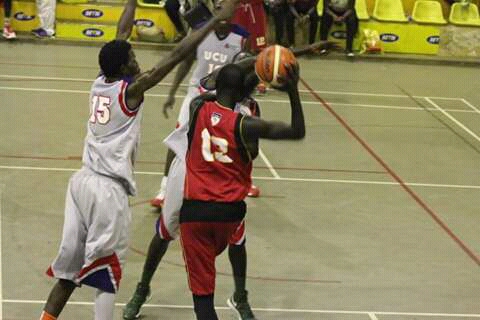 Pemba Warriors completed their double against UCU Canons in the regular season giving them more confidence a head of their re-scheduled fixture against City Oilers on Tuesday.

Warriors dominated the game from the first quarter with small figures but ensured they keep in lead.

Warriors’ points came from different players with at least 4 players averaging 10-11 points each. Syrus Kiviri and Micheal Buzangu each scored 11 while Amisi Saidi and Mark Opio scored 10 points a piece.

In other games, struggling Falcons got whooped by JKL Dolphins in a 67-103 loss. Falcons’ Karoro Francis scored 21 points while Our Savior’s Brian Ochola scored 20.

UPDF defeated Our Savior 72-64 with Andrew Okot scoring 19 points and Moses Muhumuza 17 while Our Savior’s Wilberforce Pirwoth scored 22 points which was the highest mark of the game.

In the Women’s category, Kcca found no trouble in destroying Nkumba Marines defeating them 80-48 in a game Nabusimba Halima scored 23 points, the highest of the game.

UCU Lady Canons had to give all they can to steal a win against Magic Stormers winning by 2 points gap, leading 69-67 into the last 15 seconds of the game.

Sink it And Win ! UCU Canons take on Pemba Warriors
Amoding Moreen Inspires Kcca Leopards to yet another win