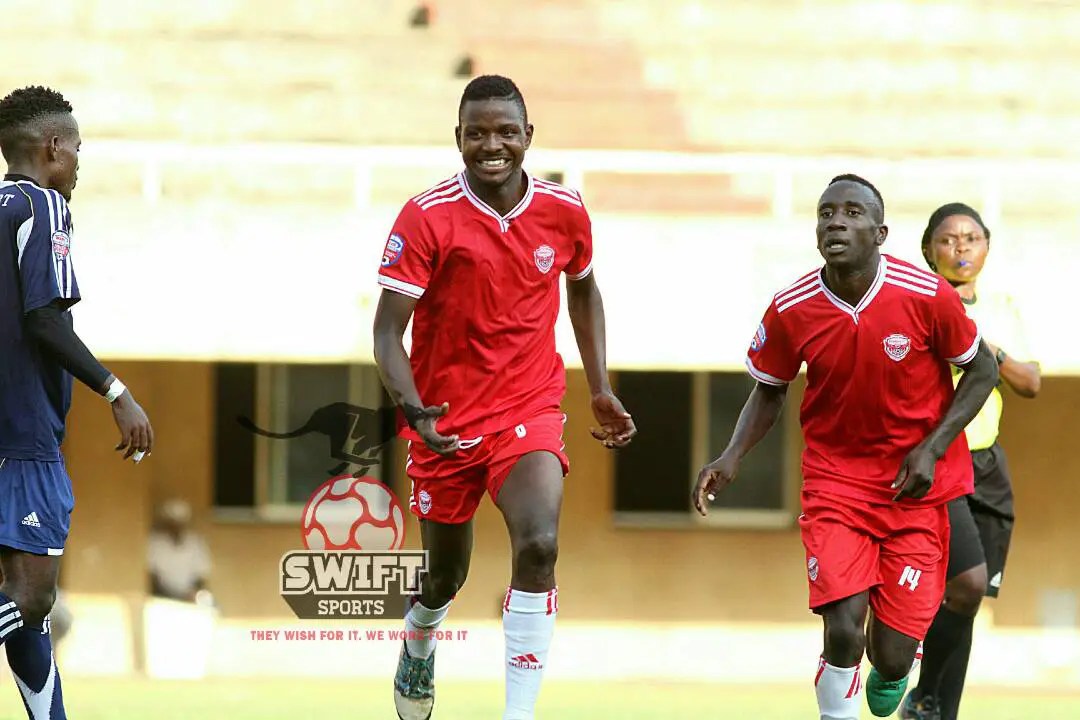 Express’ Ayub Kisalita celebrate in one of their previous games

Express will make another attempt to move from the relegation zone when they play hosts to fellow relegation fighting side UPDF FC at Wankulukuku.

Express have had a dreadful season that sees them 14th on the AUPL table with 22 points collected from 23 games played.

Bombo based side UPDF has managed to collect 25 points in the 24 games they have played and lay 12th, 2 spots above Express.

Express defeated Mbarara City in their most recent fixture courtesy of a late David Ndihabwe’s volley in the 79th minute.

UPDF on the other hand lost 2-0 to KCCA at Star times Stadium Lugogo 2-0 courtesy of an Allan Okello’s brace.

UPDF comes in this encounter aiming for a double over Express FC having won 1-0 in the first round at Bombo Barracks thanks to Ezekiel Katende’s strike.

Out of the 12 games played at home, Express has managed to win five, lost four and drawn thrice collecting 17 points out of the 22 they have.

UPDF has been a poor on the road managing to collect only 8 points after losing 9, winning twice and drawing twice in the 13 games played away from home.

Steven Bogere’s side is ushering in Isaa Mubiru who missed out on their two last fixtures due to an ankle injury.

Express FC will bank on the services of Jalil Zimula, David Ndihabwe and Michael Birungi to scoop the much needed maximum points.

Abdul Noor Lukwata, Robert Nakyenalire, Joseph Othieno and Janjali Joseph are expected to lead Bombo based side in the search for a positive result.

Steven Bogere has dubbed this game as a final and calls upon fans to turn up in big numbers to witness.

“I dub this game as a cup final since both sides need the points seriously. It is a game for men and with proper officiation I believe we are to walk away with victory.”

” I am very happy that we have no injury concerns despite missing out Majanjalo (Sulaiman) who was red carded. I believe the 24 players are good enough and fit for the job.” he added.

Victory for Express FC will spring them to the 12th position leapfrogging Mbarara City and UPDF itself.

The army side can move to the 10th position in case of a positive result from Wankulukuku.