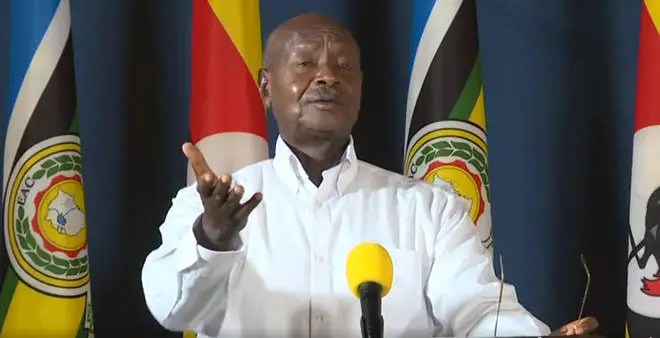 “When I heard of the unfortunate death of Isaac Ssenyange alias Mando Zebra, Uganda’s boxer and former captain of the Bombers. I telephoned his wife who narrated to me the events in detail.”

Zebra was an NRM supporter, and was mobilising for us so well. He was also training many youth in the ghetto and giving them hope in their search for meaningful life.”

“Zebra was training boxers who then would be used by some people to attack civilians.”

“Later on when I inquired, I was told that zebra was doing a great job (mobilizing for NRM in Kawempe). I, however, got some information how some of the people he trained were used to cause havoc.”

Senyange during one of the fights in his hey days

“The security people had gone to take in zebra and do some inquiry. Unfortunately when they got to the house at around 12am they knocked and they wanted people inside to open for them but people did not open. The wife later opened.

According to the wife, zebra was in the sitting room but instead of opening he went outside through the back door. She (wife) opened for the soldiers. They entered but zebra had gone. Apparently he climbed over the fence and went somewhere, a distance away from his house. The wife and the son cooperated with the security. After climbing over the fence, zebra bumped into another security team. He tried to fight them and that’s how they shot him twice.”

At first I thought they were thugs disguising in uniform, but as I continued investigations, I found out that Zebra was killed by security personnel.”

The soldiers involved say when they stopped him he refused to stop. That’s how he was shot twice and died. The security officers informed me when they heard I had started involving myself.”

“I talked to deceased Zebra Ssenyange’s wife and son. I am very sorry about this. I am going to investigate this.”