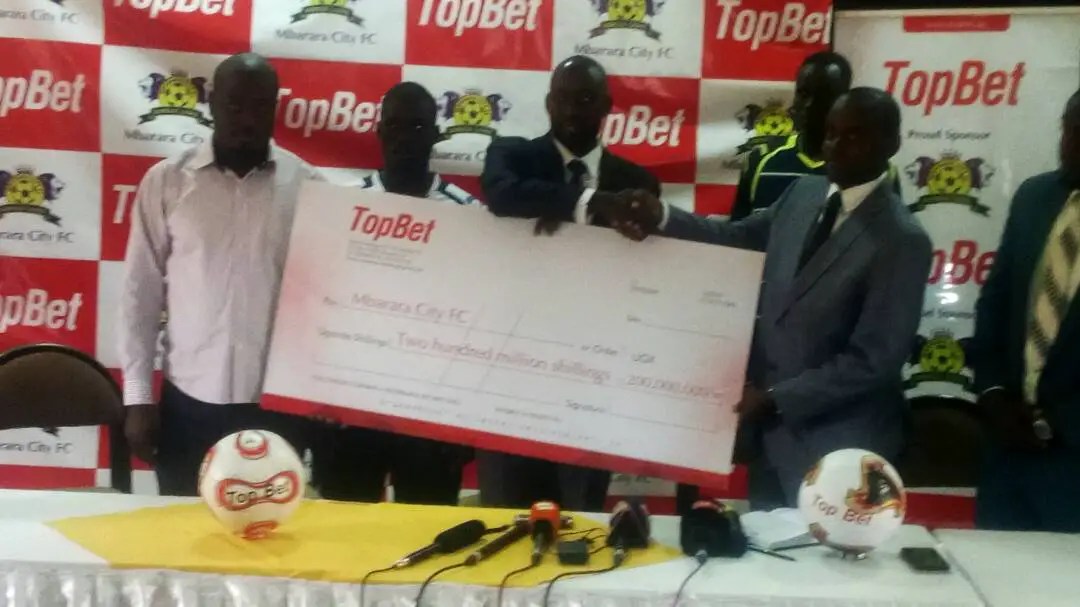 AUPL newly promoted side Mbarara City has unveiled betting company Top bet as the club’s new sponsor in a deal worth 200 millions today at Kati Kati in Kampala.

The two parties reached an agreement at the end of last week and put pen to paper on a 1 year deal with hopes of extending for more years.

The Chief Executive Officer (CEO) of Top bet Bob Mugisha had this to say,

“After knowing Mbarara City’s history and ambitions, we as Top bet decided to join them to develop talent as well as giving back to the community. Top bet will be the shirt sponsor of Mbarara City and we shall rebrand the Kakyeka Stadium. The stadium will then have our banners very soon on. The 200 millions is in cash and will help on the club in the payment of players salaries.”

The Club manager Mwine Mpaka was delighted about the sponsorship.

“We are so grateful and happy about the sponsorship deal. Our budget for this season is worthy 649 million shillings so this has given us relief. Our club had never failed to pay the players and getting a sponsorship is a set ahead. We shall continue paying them in time and we are aiming for a good season.” said Mpaka

The deal also makes the Mbarara club the second team to be sponsored by a betting company in the 2017-18 season after Onduparaka.

Mbarara City will host league games at Kakyeka stadium and start the season with an away match against BUL fc on Tuesday 12th September at Kakindu stadium.