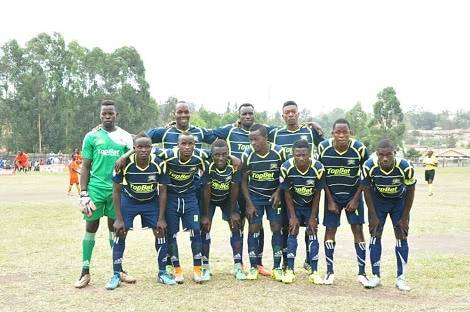 Emmanuel Obinna’s first half penalty was enough to extend Mbarara City proximity from the drop zone to 5 points.

The moment that changed the game came in the 27th minute when Swalik Bebe was fouled from outside the 18 yards box and the center referee Muzamir Waiswa controversially pointed to the spot. Emmanuel Obinna was entrusted with the responsibility and he converted it.

Enter the second half, Onduparaka made a double change with Wesley Kisakye coming on for Ezra Bidda and Gaddafi Gadihno for Moses Ndawula.

The home side was unlucky not to be awarded another penalty during the second stanza when Onduparaka skipper Rashid Toha fouled Ibrahim Orit inside the box and the referee gave a free kick for the incident.

Onduparaka almost levelled up in the later stages of the game but Hassan Muhamood’s free header was not enough to beat Mbarara City custodian Ali Kimera.

The visitors on the other hand unable to keep the ball due to lack of imagination in midfield. By the end of proceedings the result was enough to see the Ankole Lions cruising towards topflight survival.

Victory sees Mbarara City consolidated the 11th position with 32 points and 5 above the drop zone. They will end their league campaign against Kirinya Jinja SSS FC at Kakyeka Stadium on 25th May.

Despite the narrow defeat Onduparaka stays 4th placed on the log with 45 points and they will host Bright Stars in their final game of the season.

Township Rollers and TP Mazembe dominate CAF round 1 XI
BUL FC, Bright Stars face off in a fight for places