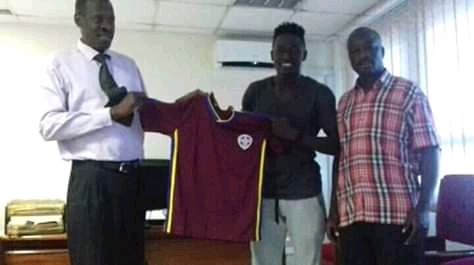 Masaza graduate Isaac Otto has put pen on paper with Luzira based side Maroons FC on a three year contract deal.

Otto is a student of Nkumba University and he has played for Busujju and Ssingo in Masaza tournament.

The centre forward has been a player of Big League side Kiboga Young and he was among the squad that guided the club to second tier promotion.

Otto believes the transfer has come at the right time and he is to work hard in proving his ability,

” I am so happy for this achievement in my life. It has always been a dream playing in top flight and I promise to work hard with my teammates to prove my worth”.

He is a Masaza cup winner with Ssingo in 2018 and has managed 4 goals with Kiboga Young from 10 games in the first round and has left them second with 21 points.

He becomes the first January signing for the Prison warders who finished the first round 12th on the log of 16 with 15 points from 15 games will open their second on 30th February 2019 paying a visit to BUL FC at FUFA Technical Center Njeru.