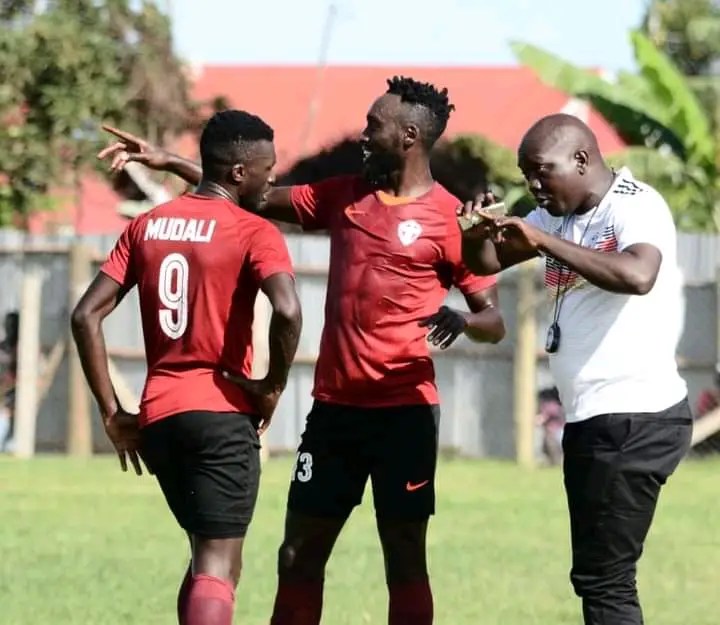 Gaddaffi FC players celebrate a goal in a recent match

Mbale Heroes condemed Charles Ayiekoh’s Maroons to a second consecutive loss in a game that ended 1-0 at Luzira Prisons grounds.

Joel Male’s sole goal is what Hussein Kheri’s Mbale Heroes needed to secure a 1-0 slim victory over The Prison Warders.

Abulkarim Kasule bagged a brace and Marvin Oshaba converted from the spot for the hosts. The consolation goal for Ndejje University was scored by Vincent Abigaba.

In the Western derby Allan Mualu scored the only goal in the game as Arua Hill SC were registering a 1-0 slim victory over debuntants Calvary at Barifa grounds.

Calvary have Julius Malingumu to blame for failing to score from the spot to at least win them a point at home.

Ten man Kigezi HomeBoyz rallied from behind to defeat Nyamityobora 2-1 at Kabale Municipal to register their maiden win of the season.

Norman Namanya and Dickson Niwamanya Kihanga were on target for Kigezi HomeBoyz a side that played 32 minutes with a man less after Robert Baluku Santos was sent off.

Clinton Kamugisha got the consolation for Nyamityobora.