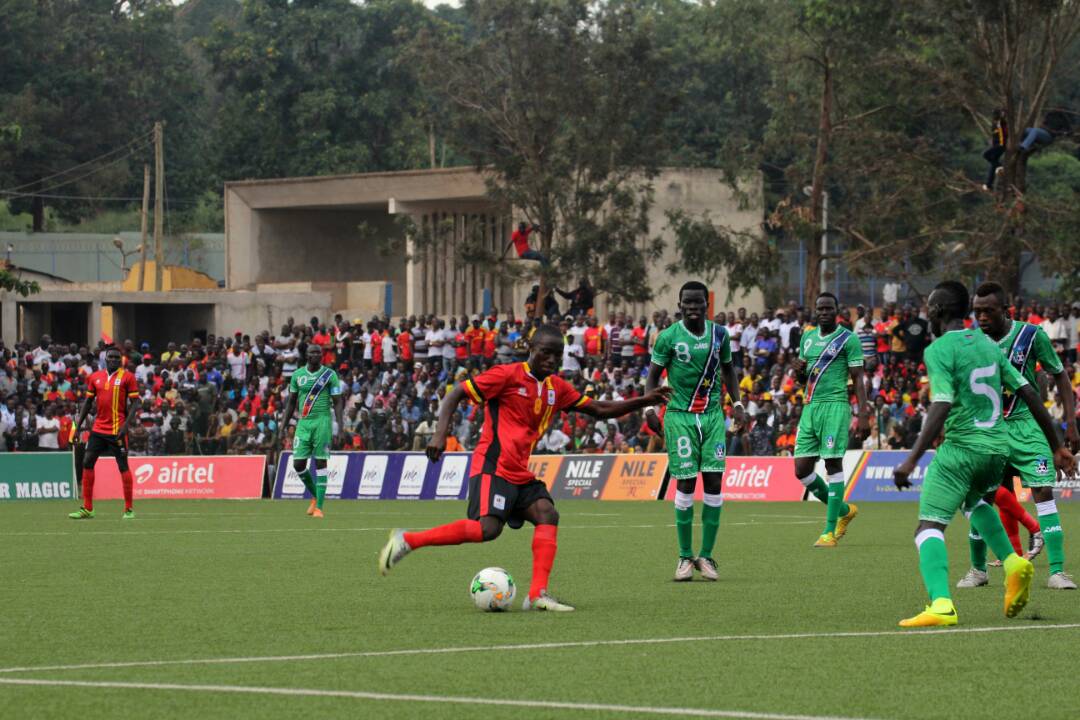 His name is Shafiq Kagimu a midfielder who plies his trade with Uganda premier league side URA FC, a very rare specie of players who are gifted with two equally good feet. He is comfortable playing across all the forward positions, he loves beating his man, cut inside and deliver those Robenesque darting crosses.

During the Uganda premier league of the 2016/17 season he produced an impressive tally of 8 goals and 7 assists, he is a defenders nightmare Denis Rukundo will attest to that when URA met KCCA at Phillip Omondi stadium in a match that ended 2-2 . After a series of eye catching performances, Cranes coach Micho Milutin Sredejovic was tempted to give him call ups into the national call ups beginning with the Cranes Na Mutima matches which is normally an avenue for local players who aspire to break through into the National team fold.

Said Micho during a pre match press conference against South Sudan and the following day, Micho read the starting 11 with Kagimu among the starters in a very decisive match.

We managed to get up close with this latest new kid on the block.

Tell us briefly who Shafiq Kagimu is.

Kagimu aspires to be a mainstay in the Cranes setup (Photo credit: Amina Babirye)

I am Shafiq Kagimu “Kuchi”, a son of the late Nannyonjo Aisha and Jingo Henry of Kungu Village Lugazi. We are a family of four siblings who Bakka Samuel, Nagayi Viola, and Nakabuye Faith. I was born in 1998.

How did the name “Kuchi” come about?

I got that name during one of the under games in Nairobi Kenya with my academy team. The fans loved my style and whenever I touched the ball and took on every opponent that crossed my way, they began chanting “Kuchi” “Kuchi” but unfortunately to this day I have never gotten a chance to learn what really it translated into .

Tell us about your education background.

My education background is typical of an African child, I moved from numerous schools especially due to the footballing sponsorships that always came my way. My Nursery and primary began in 2001, from where I joined A Pass S. S, Crimson International, St. Mbuga S. S and Gombe S. S where I completed my form six. I am currently pursuing a degree in Procurement and Logistics management at Kampala University Gaba campus.

By judgement of your exquisite exciting skills, comfort on the balls and the ability to take on people, you seem to have passed through a well established soccer academy, tell us about your footballing background

Kagimu during his early days at Zebra soccer academy in Kibuli

My football journey began as early as the the age of 5 with an academy called Zebra FC based in Kibuli in the outskirts of Kampala. The academy is coached by Kaitale Robert commonly known as “Coach Mulema” in partnership with Coach Jamada Magasi. I was here until 2012 when Kampala Junior Team (KJT) took me on to represent them in the Kampala regional league. In the season of 2013-14, Water FC snapped me up and we almost won promotion to the premier league but fell shot on the play offs at the hands Kirinya Jinja S. S. The following year I signed for Ugandan Revenue Authority FC in 2015 up to date.

Having started playing football at such a tender age, who are those notable teammates did you play with while growing up and you now see them play in the league or bigger teams?

They are quite many but I can’t list them all here at this moment, so I will give you a few, these include, Nicholas Wadada of Vipers, Titus Lubega of BUL, Masene Joshua of BUL, Luwaga Kizito in Romania Mahad Kisseka of Onduparaka, Deogratius Luron in France, Olwoch Bob in Sweden, Waiswa Moses of Vipers SC , Kezron Kizito in Kenya and many others

What drives you most to play football, that big inspiration that keeps you going?

The biggest inspiration that keeps me going strong and stronger, is the unconditional love I have for the game. I grew up idolising football super stars like Andreas Iniesta of Barcelona and Jamil Kyambadde though I didn’t get a big chance to watch him play but I used to hear people talk good of him so I also put it in my heart that to be a star, I need to work hard. Secondly I also want to be an inspiration to the younger upcoming generation, an example to whom they can look up to. I also believe one time I will be a national hero if I manage to represent my country and make it proud like the late Magid Musisi, Philip Omondi, Jackson Mayanja and many others.

Who is that person you treasure most as the biggest influence on your career so far?

That is definitely my coaches at Zebra Mr Kaitale Robert and Jamada Magasi. They did such a big hell of influence on moulding my career and they continue giving me direction to this day whenever I need it.

Andreas Iniesta Lojan of FC Barcelona and Spain. I like the way he influences the matches with the simplest of touches, I like his vision and reserved persona too.

But in most cases you like cutting inside from the wings Arjen Roben style, why do you say you play like Iniesta?

My most preferred position is the number 10 role or behind the main striker, I also like playing number 8 but as you understand the modern game is dynamic, so should we the players, I play where the coach thinks I will help the team and a position that suits my talents.

You were shortlisted among the best midfielders of the Uganda premier league season 2016/2017 and you were beaten to the accolade by Saddam Juma, what was your reaction (disappointed or)

Kagimu (left) was nominated for Award of the best midfielders of the 2016/17 season ( photo credit: Amina Babirye)

No, I was not disappointed. First of all it was an honour being shortlist among the best midfielders in the league, secondly I made it on the podium which was my first experience. I believe everything that happens to me is planned by Allah the almighty and he can never plan anything bad for me. Insha Allah next season will be mine, let me continue working harder , my faith and hope is always vested in him.

What is your ambition for the next 5 years?

Every successful story starts with a dream, so I aspire to be playing professional football in the next one or two years depending on Allah’s will and being a regular figure in the national team set up. Hopefully I will achieve those goals.

What is that lowest moment or devastating moment for u in football ( the day u felt like crying in the game).

It was during the big league playoffs of 2013/14 when we failed marginally to qualify with Water FC. We lost against Kirinya Jinja S. S on penalties and it hit me so hard that I didn’t take one of the spot kicks. To this day, I can’t forget what happened.

That takes us to the highest point of your career ?

My proudest moment came when I signed for URA FC. It was such a big day in my life because I had signed my first ever professional contract. Maybe the other day that gets closer to that was most recent on the 22nd of July when I was named by coach Micho to start against South Sudan in the CHAN qualifier return leg.

Finally, one final word to the URA fans and your fans out there.

Being an extremely ambitious player, I have always never been proud of being second best. Last season we completed the season in fourth on the log but I believe we have a good enough team to win the league and or even challenge for a double. I believe in my powers and potential and I believe I will do my level best to see that my team achieve it’s objectives.

The coming season will be Kagimu’s 3rd in the top flight and he has surely come of age, his statistics and confidence have improved tremendously, he has now become a regular in the national team fold, what we expect of him is the more exhibition of the lion heart and fighting spirit that has always moved with him since childhood. In him, URA has a heavy weapon in their arsenal.

” Sometimes I tend to see opponents undermine me by the look of my small stature and physicality, but later on when the game moves on, they are surprised by the lion heart in me and by full 90 minutes many come to whisper to me that, boy you are a fighter “.

ONE ON ONE: We get up close with Vipers’ new midfield enforcer Taddeo Lwanga.
KNOW YOUR STAR : Meet BUL FC’s loyal servant and Captain Hakim Magombe.