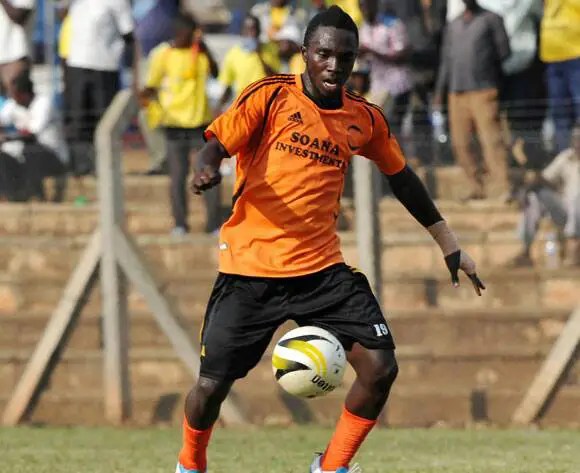 Francis Olaki taking on KCCA’s Richard Malinga during the 2013/14 season in which he was top scorer.

Soana FC skipper Francis Olaki is among the most prolific goal hunters in Uganda today. He is on the course of revitalizing his blossoming and diligent football career that sparked off a couple of years ago but was unfortunately hampered by injuries.

FAMILY BACKGROUND
Olaki is a son of Opolot Micheal and Ajiyo Grace residents of Katale in Wakiso district. He is the last born in a family consisting of five offsprings. He comes after his two sisters Ajibo Caroline and Akol Maureen and two brothers Emmanuel Okwi and Opolot Martin.

The family is proud of giving rise to 3 football playing sons. Emmanuel Okwi is an established player on the national team, The Cranes and currently turns out for Simba SC in the Tanzania. Okwi has also played for SC Villa, Etoile du Sahel in Tunisia, Yanga Africans in Tanzania and Sonderjyske in Denmark.

Opolot Martin is a defender who has also featured for country heavyweights SC Villa and URA FC before and now plays for Katale based club Simba FC in the Fufa Big League.

EDUCATION BACKGROUND
The talented striker started his education from Nsambya Police Barracks Nursery and primary school where he completed his primary level before going to through a host of secondary schools. He went to St Joseph High School Nakirebe, Exodus College Namungoona and Bright Angels Nakulabye where he completed his O’level education from. He joined Standard High School Zzana for A’level but switched to Mashariki High School Katale Sseguku where he sat for his UACE exams.

MASAZA BACKGROUND
In 2011, Olaki made his debut in the Masaza Cup as he guided Buluuli to its first and only championship in history. His offensiveness paid off as he emerged as the best player of the tournament as well as the top scorer with 9 goals. His brace notably sunk Bulemeezi in the finals to secure a 2-1 victory.
In 2011, he switched to Buwekula and guided them to the final only to lose out to eventual champions Bulemeezi.

CLUB FOOTBALL
Olaki is one of the products of the SC Villa Academy known as Jogoo Young. He played for Baza Holdings before joining Soana FC with which he gained promotion to the super league in 2013 season.

In 2013-14 season, Olaki played an integral part in Soana FC “greatest season ever” helping the club finish 5th in its maiden top flight season. Olaki finished as top scorer with 15 goals ahead of perennial scorers like Tony Odur.

In July 2014, Albanian side Klubi i Futbollit Tirana_ signed Olaki and was handed shirt number 14 on arrival but his stint in Europe didn’t last for long. On 28th December 2014, KF Tirana parted ways with Olaki and Rwandan striker Meddie Kagere on mutual consensus.

Olaki had spent most of his time on sidelines but scored one goal for the Albanian outfit which came on 20th November in the Albanian cup. He opened up the scoring in the 13th minute in a 6-0 rout against Bylis Ballsh in the second leg of the the second round of the Albania Cup.

On return to his native land, Olaki joined KCCA FC in January 2015. He was signed by coach Abudallah Mubiru alongside players like Benjamin Ochan, Lukooya Baker, Timothy Awany and Savio Kabugo who were recruited to reinforce and save KCCA’s season. However, his spell at KCCA FC short lived as injuries kept him off pitch until he left the club at the end of the season after making only 3 appearances.

In 2016, Olaki reunited with his former side Soana FC rekindling memories and a loyal attachment which also saw him named team captain. Following an inactive first round, Olaki scored 5 goals for the Kavumba based club to secure a 7th position league finish in the 2016-17 season.

NATIONAL COLOURS
Olaki made a national team debut in build up game prior to the CHAN tournament on 2nd January 2014 under the current coach Cranes Milutin Sredojevic Micho against Mauritania.

Olaki celebrates his goal against Mauritania in 2014

He was brought on a substitute to replace Joseph Mpande at the recess of second half and only used 20 minutes to make impact. His dream start was impressive as he scored Uganda’s last goal in a 3-0 victory at Namboole stadium.
Since then, Olaki has made 7 more appearances for the Cranes significantly featuring for Uganda in the CHAN final tournament in South Africa.

Olaki once shared the same pitch with his brother Okwi while representing Uganda in the 2015 AFCON qualifiers. This was in Antananarivo where Uganda was stunned 2-1 by hosts Madagascar. Olaki came on early in the second half replacing by then Turkey based Martin Kayongo Mutumba on May 18th 2014.

Olaki’s playing style is most times likened to Okwi’s. He is a quick, creative and mobile attacker who can be fielded as a left winger, a lonely striker as well as a supporting striker. His dribbling skills, scoring instincts and accuracy recommends him as an effective striker.

BEST MOMENTS
Olaki cites his first season in super league as one of the best moments he will live to forget in his career. He joined the top flight in the 2013-2014 season and finished it on a high winning the top scorer accolade while with a Soana FC side.

Olaki had a splendid first season with Soana fc

The young striker has 8 caps under his belt for the Cranes so far and scoring on his debut against Mauritania are also worth a mention in his career. He also cherishes breaking the KCCA FC unbeaten run at Lugogo with a 2-1 win while with league debutants Soana FC in September 2013.

WHAT THEY SAY ABOUT HIM

Coach Richard Makumbi labels Olaki as a clinical striker a team can count on.

Richard Makumbi was incharge of Soana when Olaki broke through

“Francis Olaki is one of the best conventional strikers I have worked with, he has two good quick feet with an eagle eye for goal. He did us a tremendous job while seeking for promotion the premier league in 2013 and he was a big pillar for Soana when we won promotion into the premier league, Olaki developed a very good tandem partnership with Peter Ssenyonjo which helped him finish as the league’s top scorer in 2014. Currently I can’t assess how much he has improved or declined since I last coached him 3 years ago but I believe he still has that killer instinct in front of goal.”

No talent is recognised unless its guided by right mentors and identified by good coaches. Likewise the pacy striker says he is grateful with the help and services rendered to him by Coaches Edward Kaziba, Kiwi Kiwanuka and Paul Nkata in the academy and grassroot levels.

Currently, Olaki is eagerly anticipative of another summon for the national duty after finding his foothold again irrespective of the stiff competition in the country’s attacking positions.