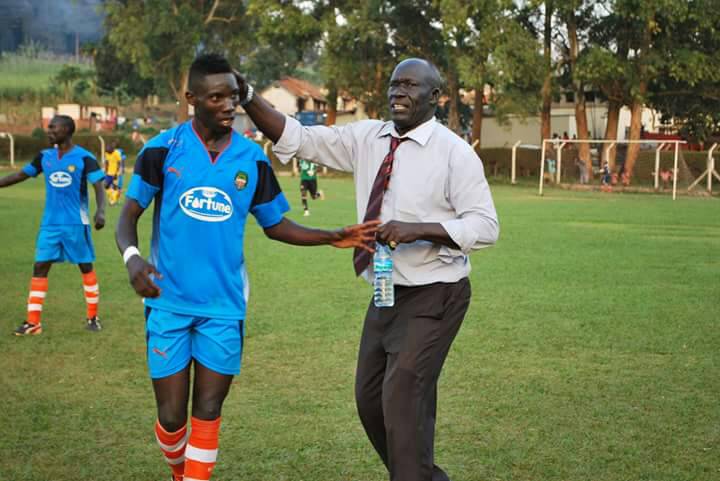 Hakim Magombe has played for BUL FC since 2011

Lately in Ugandan football, players have a known tendency of not spending long at a single club but BUL FC defender Hakim Magombe is among the few to have played for a club for more than 6 consecutive years over the last decade. A loyal and hard working servant, he has always played a vital role in BUL FC’s top flight status from season to season since 2011.

FAMILY BACKGROUND
Hakim Magombe is a son of Magombe Ramathan and Mbilere Hadijah residents of Bugembe Jinja. He is the fifth born in a family of six children alongside one brother Magombe Jafari and four sisters Namono Madinah, Mbilire Mariam, Namono Hamiyah and Mbilire Joweriah.

Hakim started his education in Bugembe Blue primary school where he completed his primary level. He went to Bukoyo Secondary School for O’level and Iganga Parents School for A’level.

FOOTBALL BACKGROUND
His football career started way back at Jinja football academy with prominent figures like Jjingo Sulaiman currently playing at Express FC and he was among players to have played in the famous Gothia Cup in Sweden in 2001.

On joining secondary, he took a sabbatical leave from football to concentrate on his education and it was after his A’level that he joined BUL FC which was by then in the first division.

Magombe is among the crop of the players that led BUL FC to the top flight from the Big League in 2011. By then, he was alongside current teammates Patrick ‘Crespo’ Asiku, Masene Joshua and William Otong. Others include Herbert Odipio, goalkeeper Kizza Adam, Bayise Said, Kakande Herbert, Mukiibi Ibrahim, Maganda Ali, Nyanzi Umar and Kamya Moses.

His hard work, discipline and patience helped him achieve club captaincy last season. At the start of the second round of the 2016-2017 season, Magombe was elevated to a more defined role at the team to skipper BUL FC.

BEST MOMENT
The gallant left back defines earning a national team call in 2013 as his best moment in the game of football. Former Cranes coach Milutin Sredojevic Micho summoned him prior to a CHAN Qualifier encounter in 2015 but he was dropped at the last minute due to unfinished passport clearances.

Magombe attributes his career to BUL FC’s team manager Were Dauda and Coach Kefa Kisala who have helped him shape his career rightfully.

He says he is very grateful that Kefa Kisala returned to BUL after 2 seasons away from the Kakindu based club.

“I am glad that he has reunited with us at BUL FC. I hope to get on my A game because of him and earn a national team call up.”

It was under Kefa Kisala in 2012-2013 that Magombe and his teammates at BUL FC had their best ever season in the Super league finishing 5th.

WHAT THEY SAY ABOUT HIM

There is no better testimony than the one told in your absence,  and for Magombe it’s even better because the man who saw him during his raw days, and has managed him now on two tenures is one to testify about him. Kefa Kisala talks with only delight about the player he has just appointed as his on field lieutenant. He says,

“I am very proud of Magombe first as a person and second as a footballer, he is a very focused player who is always willing to learn. His discipline and level headedness have helped him improve his game.”

“He is one of the few players I worked with during my first stint at BUL FC, he has improved in many aspects of the game like going forward and he is currently among the best crossers of the ball today in the league, he is a consistent performer and I sometimes wonder why he has been so much neglected by the national team technical department but I believe he will be considered due to his consistent performances”.

Kisaala however admits to the fact that no footballer lives without weaknesses and for Magembe he says,

” He needs to work more on keeping concentration over the course of the full 90 minutes, since he has added moving forward to his game, he should learn how to balance and manage when to move forward or drop back. I hope he improves in this as soon as possible because football now days is played on high intensity speed where everyone needs spontaneous decision making.”

Kefa Kisala is currently the head coach of BUL FC, he has coached at URA FC, Express FC, Masaka LC, the Uganda National under 20s , and this is his 2nd tenure at BUL FC.

“KUCHI” TO HIS MATES, SHAFIQ KAGIMU TO THE FOOTBALL FRATERNITY. – Meet the small brilliant URA playmaker with a lion heart as he takes us through his journey so far, the origin of “Kuchi”, his love for the dribble and an immaculate relationship with Allah.
The transformation from non-measurable marketing to Affiliation