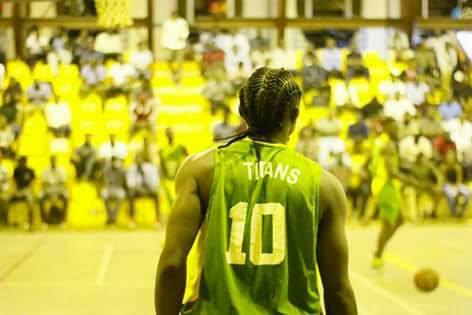 KIU Titans defeated Mukono based side UCU Canons 73-63 in their first quarter final match of the 3.

KIU looked a better side leading 20-14 at the end of the first period though UCU seemed to have picked rhythm in the second quarter firing in all corners closing the gap with 1 point low at half time, 34-35.

KIU went on to take the remaining two quarters , 54-48 and 73-63 giving themselves a chance closer to the semis as they wait for Sunday game 2 at Lugogo MTN Arena 20:00

Sudi Ulanga scored the highest points of the game, 21 and his teamate, Denis Balungu scored 14 while UCU’s Wundi Steven and Brian Namake scored 17 and 12 respectively.

KIU comes into Sunday’s game well aware UCU won’t just bow down having defeated them once in the regular season.
UCU lost 43-55 to KIU in the first round but fought and settled scores winning 57-37 in the second round.