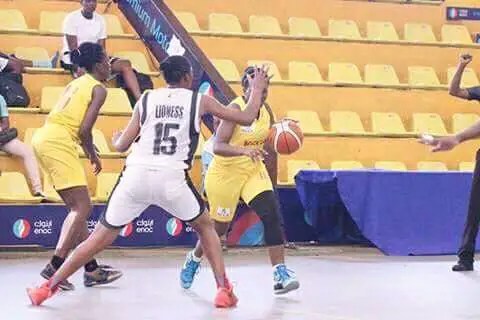 Playing in a different format from the men’s, the women are playing round robbin format which looks more like a league, KCCA Leopards who have lost once, came into day 5 of the FIBA Zone V championships in the game against Don Bosco with nothing less than winning it.

5 minutes into the 1st quarter, KCCA was already 2-0 up in an affair that looked slow. Don Bosco looked overpowered from the start leaving KCCA to run the show leading the 1st  quarter 20-3. KCCA kept going forward with their ruthless execution into the 2nd quarter 45-18, Soigi scoring 17 points.

They continued with their form in all quarters as they killed the 3rd quarter with 68-25 and winning the game 91-39.

Next game in the Women’s category was the undefeated UCU Lady Canons were taking on strong side of Rwanda APR.

Into the 5th minute, UCU were already trailing 5-12 but UCU put themselves in shape and controlled the game leading 22-18 in the 1st quarter. UCU looked better leading 45-26, 60-42 for the 2nd and 3rd quarters respectively as well as winning the game on 85-50 continuing with their 100% run.