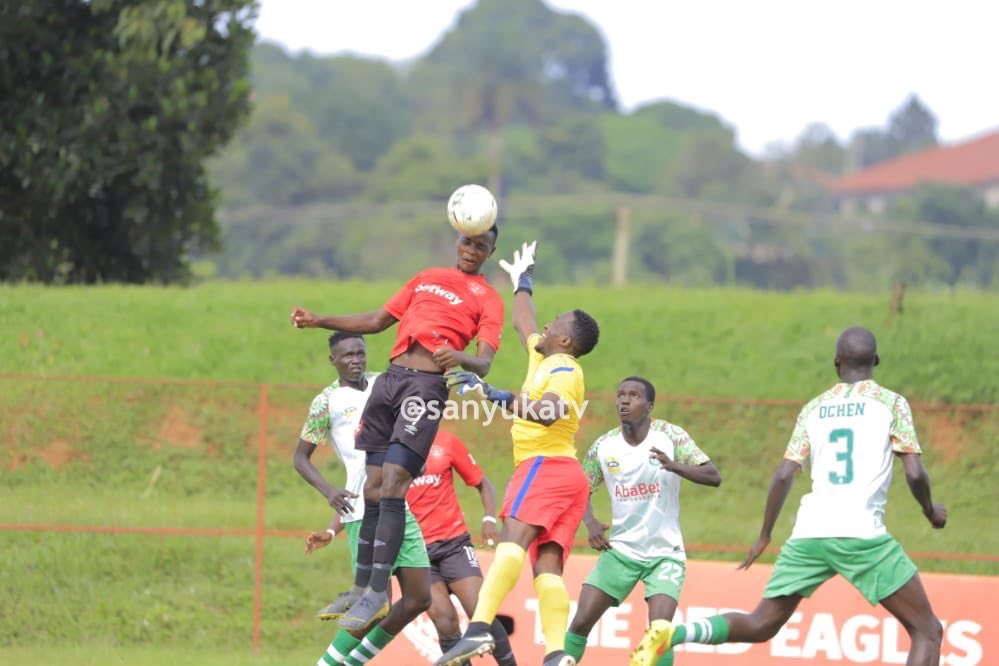 Express needed a late double from striker Eric Kambale to overcome Onduparaka with a 2-0 victory at Wankulukuku.

Kambale saved the team’s blushes after wasting a good number of goal scoring opportunities in a game that was largely dominated by the home side from the onset.

The lanky striker had two of headers cleared off the line in the 44th and 54 minute but had also failed to capitalize on a defensive howler early in the game.

Right back Denis Mubuya failed to head home perfectly from a Kambale header from close range while Charles Musiige also squandered a clear cut chance when he opted to pass instead of shooting hence a goalless first half.

Kambale tries to evade a challenge from Onduparaka’s Hakim Magombe

Bbosa’s counterpart Joseph Mutyaba made defensive chances to hold on to a point. Mutyaba brought on Alex Adriko and Saddam Norman for Joel Jangeyambe and Hakim Magombe to countermeasure Express’ relentless attacks.

Kalanda nearly broke the deadlock in the 73th minute when he one on one with the keeper Michael Kagiri but his effort came off the crossbar.

It was in the 80th minute that the deadlock was finally broken. Martin Kizza fed Kambale who launched a sublime left footed strike from outside the box that beat Kagiri.

Kambale then killed off the game with a nice diving header from Kizza’s well delivered free kick in the 90th minute.

The victory was Express’ first ever at home against Onduparaka since the Caterpillars earned their premier league status in 2016.

Express remain third on the table with 43 points but reduced the gap behind leaders URA FC from seven to four points.

They will face URA in the Stanbic Uganda Cup while Onduparaka will now shift focus to SC Villa in the same tournament.