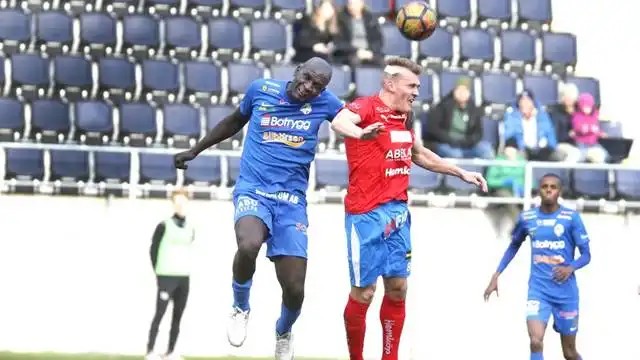 It took only 15 minutes for Ugandan defender Ivan Bukenya to score for his new side FC Linkoping City in a 1-1 draw against Nyköping BIS in the Swedish Division 1 North (3rd tier).

Bukenya who was unveiled earlier on this week on Wednesday, struck home a thunderbolt from a lose ball off a frustrated free kick from Ilir Terbunja to give Linkoping City an early lead.

The former Proline man would have gotten a perfect debut but his goal was cancelled out by a well converted penalty from Nyköping’s Christian Kouakou in the 36th minute following a foul by Michael Uwezu in the box area.

“A nice feeling to get your ball, it’s always fun to score, but the most important thing is that the team is performing,” Bukenya said after the match.

Ivan Bukenya was a late acquisition for the Swedish outfit signed from Proline FC. He has also previously played for Kaiser Chiefs in South Africa and East Bengal Kingfisher in India.

After one game played, Linkoping City are sitting 3rd on the 16-team table with one point collected.

Bukenya and his teammates will return to action on Saturday 14th April when they visit Rynninge IK at Pettersbergs IP in Örebro.