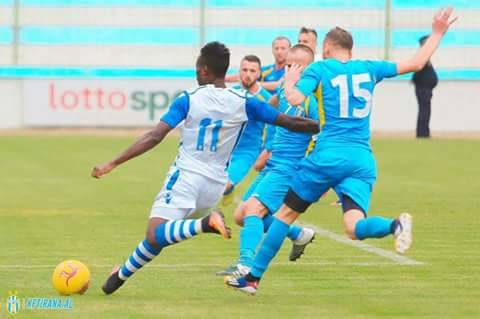 Winger William Kizito Luwagga played the full 90 minutes and was on target for the second time this season as his side CSM Iasi drew 1-1 with Poli Timisoara in the Romanian Liga. Luwagga put the hosts ahead at the death of halftime but the lead was cancelled in the added minutes of normal time when defender Alin Seroni struck home for an equaliser. CSM lasi move to the 9th spot on the 14 team table with 15 points from 12 games played.

Yunus Sentamu scored in each half to hand his team KF Tirana a 3-0 away victory over Klubi Sportiv Pogradeci in the Albanian top flight division. Sentamu put Tirana ahead in the 31st minute and completed his brace in the 78th minute whereas his team mate and compatriot Tony Mawejje was also involved in the full 90 minutes. The win keeps Tirana second on the table behind KF Bylis Ballsh
with 6 points from 2 matches so far.

Teenage striker Edrisa Lubega Torres came off the bench to score as his side Floridsdorfer AC lost 4-1 to SV Ried in the Austrian Football First league. Lubega found the back of the net with barely 2 minutes on the pitch after replacing Bernhard Fucik in the 64th minutes. Floridsdorfer AC remained at the base of the 10-team table of the Austrian 2nd tier with 7 points from 12 games.

Mike Azira’s Colorado Rapids lost 2-1 to Vancouver Whitecaps in the Major League Soccer. Azira played the entire 90 minutes and got booked in the 87th minute. Rapids remain rock bottom of the Western Conference log with 26 points from 29 matches.

Teenager Azake Luboyera was an unused substitute as Ottawa Fury played to a 1-1 draw with Louisville City. Fury has now played 5 consecutive draws and lie 12th on the Eastern conference table with 33 points.

In the Swedish Allesvenskan, Defender Ronald Mukiibi played 66 minutes as his side Östersunds FK fell 2-1 to Kalmar. Mukiibi was withdrawn withdrawn for midfielder Hosam Aiesh in the hunt for a leveller. Östersunds FK lie 6th on the 16-team log with 39 points in 25 matches and will play Hertha Berlin on Thursday in the Europa League.

In the Denmark Superliga, midfielder Robert Kakeeto played 90 minutes as his side Aalborg eased past Lyngby with a 3-1 victory. The win propels Aalborg to the 14th position with 12 games played.

In Netherlands, Melvyn Lorenzen came off the bench to replaced Bjorn Maars as his side ADO DEN HAAG registered a narrow 1-0 victory over Sparta Rotterdam. Den Haag sits 14th on the Eredivise log with 7 points from 6 games.

In the CAF Champions league, Denis Onyango and defending champions Mamelodi Sundowns were eliminated by Wydad Casablanca 3-2 on penalties after a 1-1 aggregate draw at the Quarterfinal stage. Onyango had given the Brazilians an advantage when he saved Wydad’s first penalty but Percy Tau, Yanick Zakri and Bangaly Soumahoro failed to convert their penalties.

Joseph Ochaya was part of Lusaka Dynamos as they earned a 1-0 win over Kabwe Academy to advance to the semi finals of the Barclays Cup joining NAPSA Stars and Zanaco. Davies Kasirye’s ZESCO United are set to complete the semi finalists with a tie against Kitwe United on Wednesday.

In Kenya, Former SC Villa forward Umaru Kasumba netted his 11th goal of the season as his side Sofapaka lost 2-1 away to Kakamega Homeboyz in the Kenya Premier league. The loss left Sofapaka 4th on the table with 36 points, 9 behind Godfrey Walusimbi’s Gor Mahia who are currently on the top of the table. Kasumba is in close contention for the golden boot with one goal shy away from the top scorer Steven Waruru of Ulinzi Stars.

AUPL team of round 3: The players who impressed most for their teams?
Masavu host Vipers SC in the derby of Entebbe road