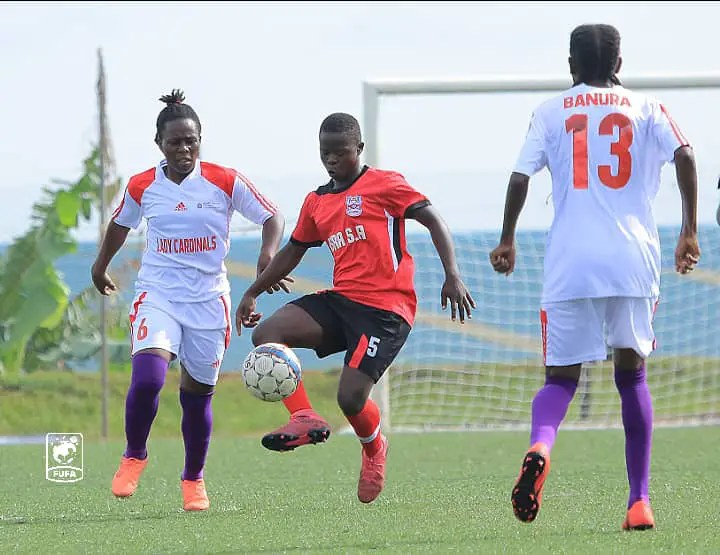 UCU Lady Cardinals needed three late goals to overcome a resilient Isra Soccer Academy side in the Friday early kick off to enhance chances of qualifying for the semi finals of this season’s Women Super League.

Skipper Hasifa Nassuna scored a brace while Teddy Najjuma headed in the other to seal all three points.

UCU came into this encounter with nothing to settle for but a comprehensive win over the whipping girls of the group who had conceded seven goals in their first two games.

Right from the onset, UCU struggled going forward while Isra comfortably sat back literally with nothing to lose.

Isra’s young goalkeeper Brenda Kasana was an improved version of herself following her erroneous exploits in the opening two games of the campaign.

Sandra Kisakye thought she had broken the deadlock with a close range header in the first half but her goal was cancelled for offside.

Jackie Nakasi nearly broke the deadlock 10 minutes into the second half but he effort hit the lower post.

With the clock ticking towards the 65th minute, UCU desperately pushed defender Shadia Nankya upfront to play as a striker and tried to play to her aerial prowess with a number of long balls.

Nankya’s first attempt was when she went one on one with Kasana but failed to shoot at goal.

With 10 minutes to normal time, Nassuna finally broke the deadlock after capitalizing on a defensive lapse to slot in the ball and put Kasana from close range.

Nassuna put the icing on the cake at the stroke of full-time with a solo effort that also took her tally to 91 top-flight goals since 2015.

UCU will have to tame Olila High School in their last group game scheduled for Saturday. Isra are the first team to be eliminated from the group but will play against She Corporates in their final game on the same day.

The Lady Cardinals are now second on the Group 2 table with six points, one behind leaders Lady Doves.