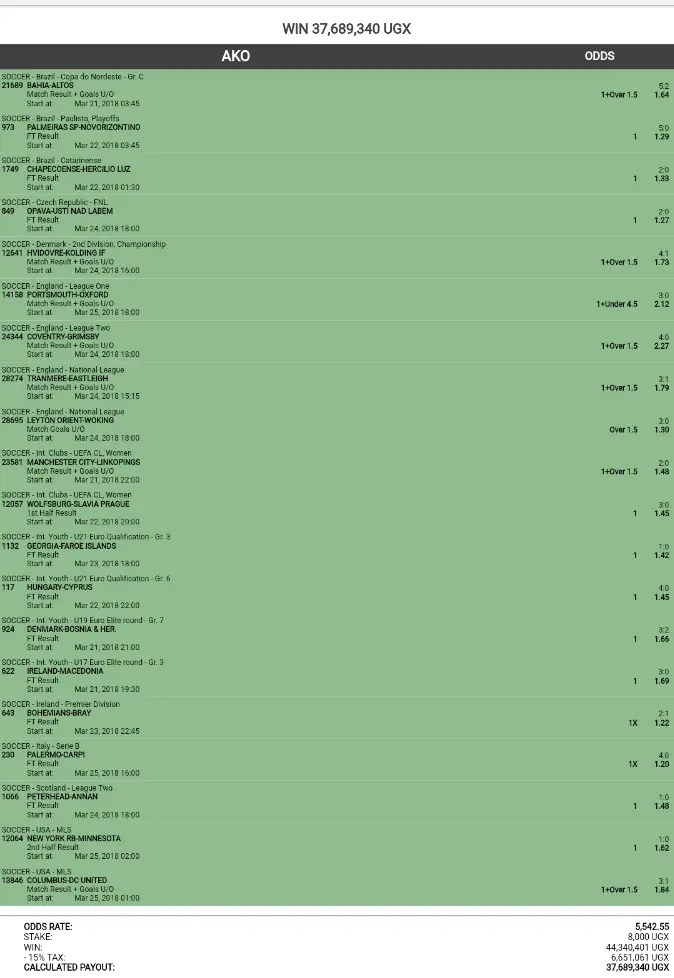 What a way to enter this long Easter holiday with a none-loan 37 million. Just like many other winners, cash from Fortebet continued to flow to another customer (punter) after staking only 8000/= and winning a whooping 37,689,340/=.

Most interestingly, this lucky punter selected 20 games and they all won. His winning trick was only one – selecting as many home wins as possible. Below is how he selected the winning games;

Under the same category, he also selected matches from under 21 Euro qualifiers and these included; Georgia -Faroe Islands, Hungary Cyprus, Denmark – Bosnia & Herzegovina and Ireland – Macedonia.

To make his 10 games under this category, he too selected these matches; Peterhead -Annan from Scotland league 2 and New York RB – Minnesota from USA MLS. All the above home teams won their games.

He too selected 2 more teams and predicted that they would either win at home or afford a draw as the worst. These included; Bohemians – Bray (Ireland Premier Division) and Palermo – Carpi (Italian Serie B). Leyton Orient -Woking from English National League is the other match the punter saw will earn him money. He predicted that the match would end with at least 2 goals and indeed it ended 3-0.

This betting slip carried a total odd of 5,542.55, generating the above money. As soon as he won, his money was instantly paid out to him as Fortebet usually does.