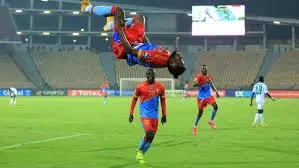 DR Congo and Congo Brazzaville successfully booked places in the quarter finals of the ongoing CHAN tournament as Group B game came to an end.

Despite being hit by the coronavirus, DR Congo managed to overcome Niger through goals from striker Kadima Kabangu and Amede Masasi Obenza.

Kabangu gave the two time champions the lead with a brilliant header from Idumba Fasika’s long ball in the 27th minute.

DR Congo’s goalkeeper Siadi Ngusia Baggio had not disappointed until the 73rd minute when he failed to deal with Mossi Issa Moussa’s header which temporarily tied the game at 1-1.

Just like in the previous game, Masasi Obenza won it again for the Leopards when a feeble kick from the Niger goalkeeper Abdoul Halidou landed on his feet just at the edge of the box in the 90th minute.

Forward Cautrand Ngouenimba scored the all important goal that inspired Congo Brazzaville to the much needed 1-0 win over Libya in the 52nd minute.

Libya had chances for redemption but Salah Fakhron and Mohammed Makari but Congolese goalkeeper Pavelh Ndzila denied them.

Congo Brazzaville will face Group A winners Mali in the quarter final on January 30th in Yaounde while Cameroon will play against DR Congo in Douala on the same day.

The tournament will continue on Tuesday night with Group C games. The Uganda Cranes face holders Morocco in a must win encounter while Togo and Rwanda face off in the other game.