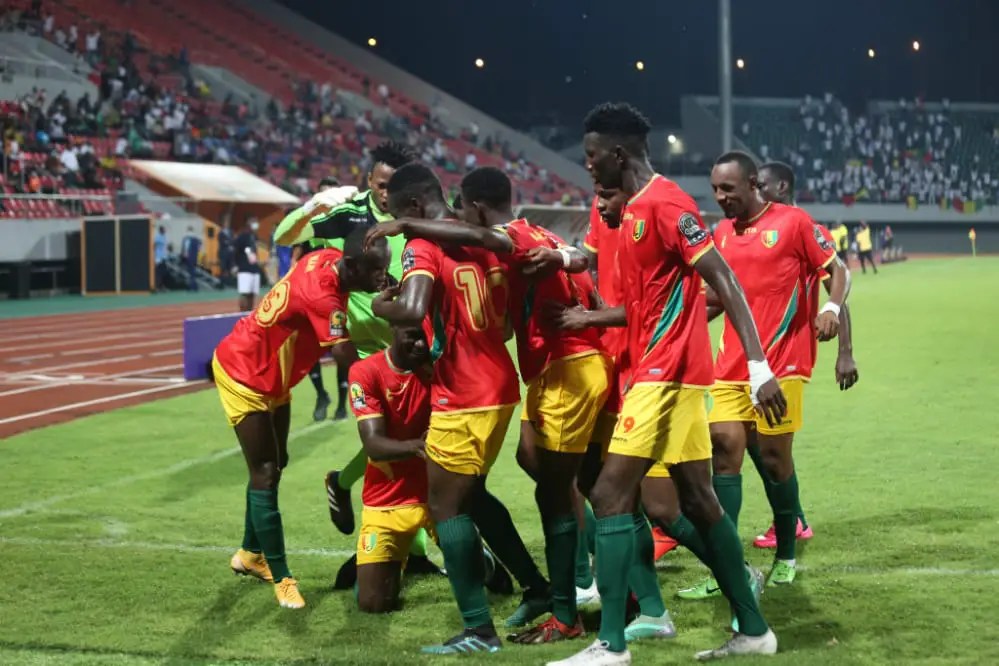 Guinea players celebrate 5of their goals

Guinea Conakry started their CHAN tournament with a commanding 3-0 win over Namibia in the second game of Group D played in Limbe.

Yakhouba Gnagna Barry scored a goal in each half while Morlaye Sylla added another to ensure an easy victory for the Nationale Elephants.

Namibia had their goalkeeper Edward Maova and midfielder midfielder Immanuel Heita to blame for giving away possession to Yakhouba Gnagna inside the box in the 13th minute. The lanky striker made no mistake but to punish them and subsequently put Guinea in the lead.

Morlaye Sylla exquisitely struck a right footed beauty at the edge of the box to make it 2-0 in the 45th minute.

Namibia started the second stanza with clear intentions of scoring at least a goal but Guinea’s highly rated goalkeeper Moussa Camara stood up to the challenge.

Camara made a big save to deny Ambrosius Amseb who had perfectly struck a free kick from about 30 yards. Camara made another save from the resultant corner kick.

Guinea lead the Group D table courtesy of goal difference and will next face Zambia who beat Tanzania 2-0. Namibia will play Tanzania.

The CHAN tournament will continue on Wednesday with Group A games. Hosts Cameroon face Mali in the early kick off while Zimbabwe and Burkina Faso will face off in the 4pm kick off.