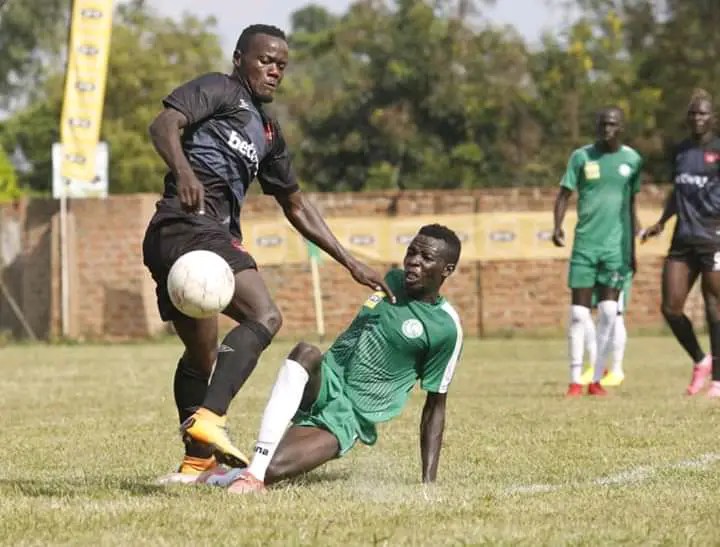 Onduparaka and ten man Express FC played out to a 1-1 draw in a league contest played at Greenlight Stadium.

Kabong Living scored a second half penalty to cancel out Frank Kalanda’s first half strike who also netted from the spot.

The visitors had brilliant start to the contest and in the 10th minute, they were awarded a penalty by centre referee Rajab Bakasambe after Onduparaka defender Mahdi Ajobe fouled Kalanda in the forbidden area.

Kalanda stepped up and calmly fired Wasswa Bbosa coached charges into the lead.

Moments later, Eric Kambale wasted a glorious chance that could have extended the visitors lead.

The hosts gained momentum but couldn’t find a way through during the first period of the game.

Onduparaka continued to search for the leveller and were the better side in the opening stages of the second half.

In the 68th minute, Onduparaka were awarded a penalty after Express FC skipper handled the ball on the line which was also punished with a send off.

Kabong was entrusted with the responsibility and he calmly slotted the ball home to level matters.

Godfrey Lwesibawa and Abel Eturude were all booked on the visitors side, while Mahdi Ajobe also went into the referee’s book on the hosts side.

This is the third time that the two sides have shared spoils in the seven league games between them.

Onduparaka FC will next travel to KCCA FC on Tuesday while Express FC will entertain reigning champions Vipers SC.