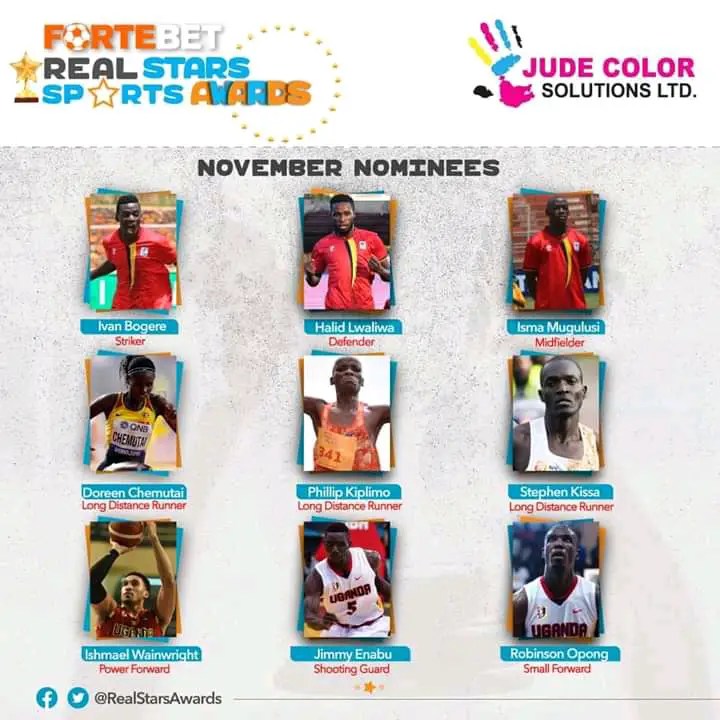 The Fortebet Real Stars monthly sports awards will return on Wednesday, 2nd December when the best personalities who excelled in the month of November will be awarded.

The awards were last held in February but were halted due to the deadly global Coronavirus pandemic that also affected the sports industry.

The excelling personalities from Football, Basketball and Athletics are to be awarded at Copper Chimney, Lugogo on Wednesday morning.

In the Athletics category, Philip Kiplimo, Doreen Chemutai and Stephen Kissa will battle for the Fortebet Athletics award for the month of November.

Ismael Wainwright, Jimmy Enabu and Robinson Opong who were with the Silverbacks at the Afrobasket championship in Egypt will compete for the Basketball gong.

In football, Halid Lwaliwa who scored Uganda Cranes sole goal against South Sudan in Africa Cup of Nations qualifier contest will lock horns with Uganda U20 duo of Ivan Bogere and Isma Mugulusi who have astonishingly been impressive for the side at the U-20 AFCON CECAFA Zonal Championship in Tanzania.

The three categories to be awarded